We are a community of various authors with different points of view on the PTSD/TBI landscape. Some suffer the effects of PTSD/TBI, others only PTSD, and you'll also hear from the family members who find themselves trying so valiantly to help us. These are our stories... These are our lives with PTSD/TBI. 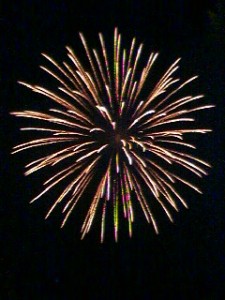 I finally did it! After eleven long years, I finally attended a fireworks display with my kids! Guess what?! I survived not only the fireworks, but navigating the crowds with three little ones…by myself!

All in all, I actually enjoyed myself! The girls were able to play on the bouncy houses, get their face painted, and even stood in line for patriotically over-priced snow cones! The girls were able to get those twisted balloon things that end up being made into all kinds of things (one had an alien that rode on her shoulders, one had a sword, and one had a flower). Granted, none of the balloon characters made it home, but they were free, so I wasn’t terribly heart broken (especially since I’m allergic to the stupid things).

I had originally decided to attend because my teen invited me. I figured with her there, I’d be able to get through the fireworks. Well, she went AWOL with her friends and I only saw her once the entire evening. Thankfully, my best friend and her family showed up just minutes before the show started. Between her and Chauncey, they got me through. I purposely sat far enough away that I couldn’t hear them launching, and I enjoyed all but the absolutely largest shells. Those were the ones that I could feel the repercussion of their explosion in my chest and that would trigger me, but as I said, my service dog Chauncey (who did amazingly well with the fireworks) and my best friend saw me through.

I definitely think we will do it again next year. Perhaps I will be able to convince a couple of my fellow veterans to attend with me. Just showing up was a huge step for me and I hope I can share that with others next year.

Moral of this story: don’t be afraid to face your fears…you may be pleasantly surprised at the results. If they aren’t what you expected them to be, you will at least know that you tried. Perform an after action and see if there is anything you could do differently next time to improve the outcome!

Recently, I read “Neurobiology of PTSD” from Psychiatric Times (March 1, 2008) by John Medina, PhD. Below is a review (of sorts) of this article:

The search for a biological basis of Post-Traumatic Stress Disorder (PTSD), the study for the root cause is still relatively in its infancy. Psychologists are looking at the question of Nature vs. Nurture for a potential source.

There have been studies regarding whether PTSD can be explained by pre-existing conditions, thereby making it an issue of Nature (genetics) using monozygotic twins. Both showed an “alteration in hippocampal volume and morphology”. Though only one was exposed to “intensely stressful events (combat)”. Was this a pre-existing condition (nature) or a physiological change due to the stressor (nurture)?

This line of inquiry led researchers to look beyond the average member of the group and compared to the population distributions. Instead they began to focus on those animals that were at the opposite ends of the population spectrum. They began to study those who were appearing to recover much more quickly than the population from ‘fear extinction experiments’ and compared them to those at the opposite end of the distributions, the overly-reactive population. In doing so, scientists were able to identify two phenotypes within the overly-reactive population. These phenotypes are currently being researched in animals.

Some researchers are focusing on “certain regions of the mammalian genome [consisting] of short, repeated, noncoding sequences called VNTR’s (Variable Number Terminal Repeat), attempting to identify whether these variations could hold the key to how PTSD could be inherited through chromosomal sequences. One study found a VNTR variant in patients who experienced PTSD. Other studies have looked for associations between gene mutations in the glucocorticoid receptor and PTSD, others have focused serotonin receptors.

There are also arguments about how much ‘nurture’ plays a role in the development of PTSD after a traumatic event. There are questions of whether the physiological changes that have been demonstrated with PTSD are epigenetic or hereditary. Are they a physiological reaction to trauma or a pre-existing genetic mutation that predisposes a person to develop PTSD? Epigenetic studies have explored how much nuture effects development of the ability to regulate stress. Researchers have shown that environmental influences can cause “permanent alterations in hippocampal glucocorticoid receptor expression and subsequent hypothalamic-pituitary-adrenal axis”. This issue is currently the source of intensive research.

Not all studies are in agreement, however. There are theories of “methylation” and its molecular effects on genes. Hippocampal volume has also been studies; however, it is known to be able to change “as a result of environmental exposure, duration of certain illness, and even the age of the subject:. Also, it has been shown that hippocampal volume changes are not consistently shown in all age groups. While it can be present in younger patients, it is not generally associated with older patients.

Is PTSD genetic or environmental? Could it be both? The studies, while in their infancy, don’t seem to universally come to a singular answer. How do twins both show physiological changes with PTSD, though only one was exposed to trauma? That would be ‘nature’. Yet, how is it that who people can experience the same trauma but only one goes on to develop PTSD? From the things I have read, I am beginning to believe it is both. There has to be some genetic element to cause the physiological changes that have been documented to occur with PTSD. Yet, you cannot discount the influence of ‘nature’. Individuals who experience multiple traumas throughout their lives are more likely to develop PTSD than those whose lives were sheltered from trauma. Having personally experienced multiple traumas, I developed PTSD. Others who deploed with me, who experienced the same elements of combat but did not have the previous lifetime traumas, did not develop PTSD. Yet, for how little I experienced in compareson to other combat veteran, how did I develop PTSD, when others who experienced much worse and emerged apparently unscathed?

The above photograph is U.S. Navy Hospital Corpsman 3rd Class Sean Stevenson as he takes a knee while on a security patrol in Sangin, Afghanistan, June 6, 2011.(U.S. Marine Corps photo by Cpl. Nathan McCord).