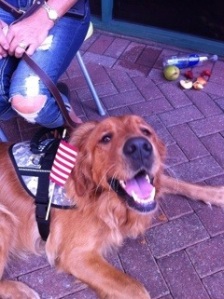 Most people weather life’s changes with little more than some slightly elevated stress levels. For someone with PTSD, however, even the smallest of life changes can make them feel like their life has been turned upside down.

Right now, I am three days from a major life change. In three short days, I will get on an airplane and fly to Florida where I will meet my service dog for the first time. His name is Chaunsey, the beautiful golden retriever in this picture. We will train together to learn what it means to be a team. I will learn what his ‘alerting’ behaviors are, and he will learn how to perform tasks that mitigate my disabilities. This is a huge step. This will be the longest I have been away from my family in, well… ever. I have never been away for even a night without at least my husband, if not my kids. This is something totally new to me. I will be hundreds of miles away from my support system and that thought scares me to death. The ONE thing that is keeping me from canceling the entire thing is this single simple fact…I will be gaining a new tool to add to my support system. A tool that will allow me to do something as simple as going to the grocery store alone, or taking my children to the park without having to worry about freaking out (though I will admit, most of the time they keep me pretty grounded to the present).

I also know that my life will continue to change once I’m home. No longer will I be able to hide away in my bed when depression is rearing its head because Chaunsey will need exercise and potty breaks. He will need to be fed and brushed, but most of all he will need attention. His needs will require me to come out of myself and engage in the world around me instead of hiding in my computer and isolating myself away from the world.

There are so many things that Chaunsey and I will do together that they would be impossible to list them here. But there is something I would like to share. If you, or a loved one, think you would benefit from a service dog, and you are a post-9/11 veteran, I encourage you to check out K9s for Warriors. Without their generosity, I would not be getting ready to enter this new chapter in my life.  They are a non-profit group based in Florida that provides these dogs to post 9/11 veterans at no charge. Also, if you think you may need help with transportation to and from Florida (its a three weeks of training, lodging is provided), I encourage you to check out Veterans Airlift Command. These generous pilots volunteer their time to fly veterans and their families all over the country.

I will do my best to update everyone about our progress over the next three weeks. As I have said earlier, I am terrified right now…but I am also hopeful. I feel as if the light at the end of the tunnel is finally turning on and the darkest hours of my PTSD may soon be behind me. I know this isn’t a cure. I know there will still be bad days or weeks, but, I know with Chaunsey, I will have a life long battle buddy that will be with me 24/7. Everywhere that I go, he will go. When I have a bad day, he will be there. He will bring me out of the flashbacks, interrupt the panic attacks and help me with mobility. I will be his forever human. Neither of us will ever be alone again, we will be battle buddies, we will be a team.

That’s what I’m going to talk about right now. I read somewhere over this holiday weekend a little blurb from someone i can’t remember so i apologize for not giving him or her credit. But it said something along the lines of….what if you came home, what if you didn’t die in that god awful  country. What if you alive and at home.

I have been trying to put that into perspective, have tried to grasp it, to realize what it means. I can that I have and i haven’t. The passage goes on to say, that what if you weren’t killed in war, but made it home alive. It wouldn’t matter if you were your regular old self, or had changed just a little. IT wouldn’t matter if everything other weekend some one had to bail you out jail because you were being stupid. What if you tried to cut yourself off from everyone, didn’t want shit to do with your friends. What if you got hooked on drugs or just got rid of everything you had and started bumming of everyone, lived on the street. Any number of things.

What if……even if everyone of those things happened all at once. every damn thing….at least you would freaking be here. You be here in this world with us. I am trying to grasp that concept, because sure as shit true. At least you here, albeit maybe its a burden or a pain in the ass sometimes  but god admit you here, Your alive, your not buried somewhere like Arlington, or you home town plot in the back country.

Maybe you’re in a rehab center, maybe you have your own box under a highway overpass. Who cares, I would walk through every minute, every second of that with you just to say you made it home. That you got that opportunity to be a screw up, the opportunity to lose everything, and then turn your life around and then hell do it again.

The constant in all of that is you are here, the opportunity is there for you to what if ….I have know how hard it is to deal with almost all of those things.

So please all of  you that are dealing with those things, family, friends, loved ones, shit complete strangers. Realize you got that what if…you safe still here and able to fuck it all up and start over. Those that gave their lives for ours can’t. I know first hand its hard as hell to grasp that, some days i do, most days i don’t.

Just remember what if….

More than 65 years after it was suppressed by the Army, a powerful and controversial John Huston documentary about soldiers suffering from the psychological wounds of war has been restored by the National Archives and debuts Thursday on the Web.

“Let There Be Light” portrays GIs just back from the battlefields of Europe and the Pacific — trembling, stuttering, hollow-eyed and crying. Using a noir style, Huston filmed dozens of soldiers in unscripted scenes from their arrival at an Army psychiatric hospital on Long Island through weeks of often successful treatment, culminating in their release to go home.

The restoration “reveals the film’s full force,” said Scott Simmon, a film historian and English department chairman at the University of California, Davis.

Even after the Army approved its release in 1980, the…

The above photograph is U.S. Navy Hospital Corpsman 3rd Class Sean Stevenson as he takes a knee while on a security patrol in Sangin, Afghanistan, June 6, 2011.(U.S. Marine Corps photo by Cpl. Nathan McCord).